James A. Moore is the author of Seven Forges and The Blasted Lands published by Angry Robot Books. 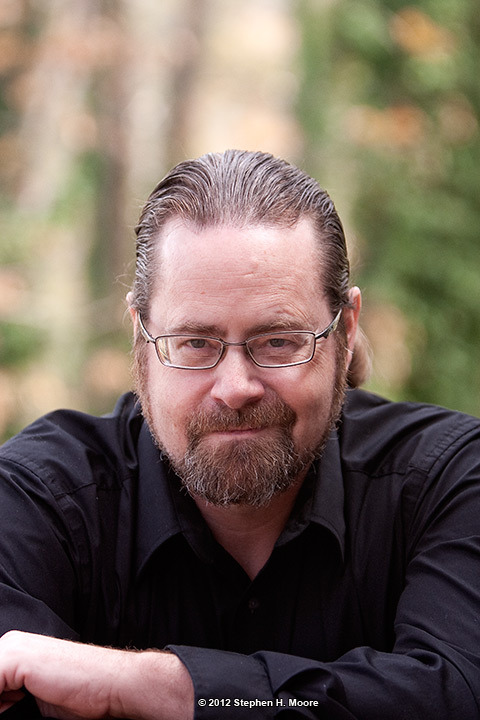 I’ll limit to my favorite three: 1) The chronicles of Elric of Melnibone by Michael Moorcock. 2) The tales of Fafhrd and the Gray Mouser by Fritz Leiber 3) I’m a huge fan of Joe Abercrombie’s THE FIRST LAW trilogy 4) Okay a fourth: The Chronicles of Prydain by Lloyd Alexander

I have to say, I could Definitely enjoy Middle-Earth. Give or take all the Sauron business. But the scope is wide on that one, isn’t it? Too many possibilities. I would also rather love living in a Silver Age comic book world. You know, BEFORE all the heroes went dark and brooding.

Every day. At least for a few hours.

Seat of the pants, to be sure. I spend a lot of my time considering what I want to write before I ever sit down, but I seldom outline anything first.

How do you discipline yourself to get the words on the page? Any advice here for less established writers?

What inspired your idea for the Seven Forges story?

I really wanted to see a different fantasy story. I rather liked the idea of a goliath of a nation looking at a much smaller one and saying, “These guys are damned scary and I don’t much like the way they’re looking at us.” More importantly, I liked the idea of them having a really, really good reason for being afraid of the smaller nation. Ultimately you have a nation that has grown comfortable in their place that is suddenly reminded that being comfortable might not be a good idea. Also, and this one is important to me, I wanted to do a story where the idea of a “good” team and a “bad” team isn’t; always easy to decipher.

What did you learn from writing Seven Forges that helped with your writing of The Blasted Lands?

World building is HARD. I wanted to make a new world, and there’s a lot more involved in that than you might think. There are religions to consider and the histories of nations. There are politics all over the place and there’s a matter of what sort of magic or technology you’re going to deal with. Are their other species out there? What can they do? What have they already done? What are they planning to do about what you’ve already done.

How has your experience been with publishing in the fantasy genre?

You know what? I’ve been dealing with Angry Robot Books and I kind of love them. They’ve made it a wonderful experience.

Any advice for first time writers hoping to get into fantasy?

Thanks for the questions. Anyone who wants to keep up with me can always find out the latest at http://genrefied.blogspot.com

Thank you very much for your time!

2 thoughts on “Interview: James A. Moore”