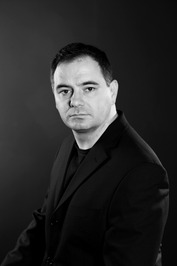 My favourite fantasy novel is ‘Wolf in Shadow’ by David Gemmell who’s had big influence on my work along with many others. At the risk of being predictable my favourite fantasy series is ‘A Song of Ice and Fire’ by George RR Martin, I just love the sheer scope and ambition of it.

Most fantasy settings would be fairly dreadful places for a 21st century person to live in; limited technology, no television, constant warfare with Dark Forces, etc. Robert E. Howard’s Hyborian age always seemed like a lot of fun though, but only if you were Conan.

How often do you write and how important is it for you to keep a strict schedule?

I write most days and tend to produce more if I maintain a daily routine, though I can write pretty much anywhere if I have to. About a third of Tower Lord was written on an iPad during my daily commute to my former day job. Luckily, I don’t have do that anymore.

Are you a ‘seat of your pants’ writer or are you a structure guy?

I started out as a pantser but I plan my work these days, though I’ve noticed the more elaborate the plan the more I tend to deviate from it. My books tend to be fairly long, the last three all topped the 200,000 word mark, and I doubt I could produce a book a year if I didn’t work to a plan.

The last book of the Raven’s Shadow trilogy ‘Queen of Fire’ is due out on July 7th; did you run into any challenges writing the conclusion of the trilogy?

The ending was a particular challenge, ensuring all the various story strands came together in the right way and the whole thing paid off was difficult and it took me a while to puzzle it out. Also, I’d put my main character through a significant change at the end of Tower Lord so I needed to reflect that in the story. Fingers crossed I succeeded.

You are one of the big success stories of a self published author going traditional, is traditional publishing all its cracked up to be? Which do you prefer?

I’m hoping to stick with traditional publishing for my next series, which I think answers the question. There are pros and cons to both. I’d contend that traditional publishing still offers the best chance of reaching the widest possible audience whilst self-publishing gives the author complete control of everything and you don’t have to wait six months for a royalty statement. I do hope to self-publish some more material in future, though, as there are some stories in my ideas bank that will be better suited to an indie approach.

Your Work in Progress:

Now that your trilogy is about finished, do you expect to write more in the fantasy genre?

As luck would have it, I just finished the first volume in my new fantasy series. I don’t want to say too much about it just yet, but the setting is a bit of a departure for me and it features dragons in a big way.

Are we going to see any more of the world of Blood Song?

I’ll be leaving it alone for a while, though the upcoming Blackguards anthology will feature a Raven’s Shadow novella and there may be other shorter works to come. I do have some ideas bubbling away for another trilogy but it’ll be a couple of years before I’m ready to write it.

Just to thank everyone who bought one of my books, I couldn’t do this without you.

Anthony Ryan is the author of Blood Song, Tower Lord and the forthcoming Queen of Fire- due out on July 7th. If you’ve missed Anthony’s books or they are buried deep in your to-read lists, I highly recommend checking them out! You can hear more about Anthony Ryan’s books and what he’s up to by following his blog https://anthonystuff.wordpress.com/.