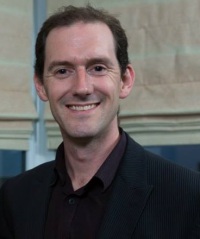 The first two books in the Riven Wyrde Saga are out; do you already have a set idea for the remaining books of your series?

I’m writing the next book now. There are a lot of story threads to bring to a close and I’m hoping to accomplish this in one book, making this a trilogy. I’ve had the end of the story planned out for a while now, but then that’s how I tend to write. The beginning and the end of the book are clear in my mind; it’s that pesky bit in the middle that causes all the problems.

Do you have any other works planned for the world of Fae?

It’s a big world, and really, we’ve only seen two very small parts of it. Although this series was planned as an epic fantasy, I wanted to focus on a few locales rather than looking over countries and continents as a whole. So whilst the conflicts cover nations, we zoom in on particular areas rather than looking at the macro level. Most of Fae – The Wild Hunt is focused on Hesk and Widdengate, there are huge sections of the world that aren’t even discussed. I can’t see any reason why there isn’t scope for another series or two in the same world. I have some ideas for a series of introductory novellas building up to another trilogy. This series would be based in Dern. We don’t really know anything about the place other than the fact that they must be reasonable close to the Barren Isles. There’s also a lot of history to be played with here and it could be fun to go back to fall of the druids and the purges. I’ll finish this book and see what mood takes me.

How often do you write? Do you keep yourself to a strict writing schedule?

I write every weekday. I’d probably be a better writer if I wrote every day, but I suspect that might be grounds for divorce. I try to stick to a target of 10,000 words a week. It’s taking me a little while to build back up to this kind of output. For some reason every time I finish a book I have to learn to write all over again. I also have a very young family so writing is built around the demands of various small people (kids not gnomes).

What challenges have you needed to overcome as a self-published author writing a series?

This is two questions in one really… sneaky! I’ll look at the issues in turn. Probably the biggest hurdle has been achieving some visibility whilst moving past the self-published stigma. There is a lot of self-published fiction out there. Hell, there is a lot of fiction out there. More books than any one person could ever hope to read. Getting word out about a book, whilst fighting past the “self-published” stigma, is HARD work. It’s probably harder that writing the books in the first place. The problem with self-publishing is that, whilst it’s wonderful and amazing that anyone who wants to can put a book together and set it out there for the world to see, anyone can do it, and a lot of it turns out to be rubbish. Don’t get me wrong, there is some pretty awful stuff that has been traditionally published too. There are also some brilliant self-published works out there, but it’s the label, “self-published” that carries the stigma. People read “self-published” and instantly assume the worst, such as bad (or no) editing, poor formatting, vanity project. Writers like Hugh Howey, Michael J Sullivan, and Andy Weir are working to challenge this assumption but it’s still out there.

For me, the major challenge of writing a series comes down to a question of speed versus quality. I’m a relatively unknown author, plus there are a fair number of readers who won’t touch a series until it’s complete. My challenge then is to get my books out as fast as possible, whilst still keeping the level of quality that I’d hoped for. I’ve made some mistakes, set some insane self-imposed deadlines that were never going to be achieved, and I’ve worked with some copy-editors who weren’t all they cracked up to be, but I think we’re starting to get there. Fae – The Realm of Twilight launched quite well and I have hopes that book three will be well received.

Any advice for first time writers looking to self-publish?

If you can, if you have the will-power, then don’t do it! I self-published because I’m impatient. I sent my first book off to a few agents but I should have sent it off to a lot more than I did. Get your book ready and try the traditional route first.  If you’re absolutely set on self-publishing then you must understand that it’s not free. You will need to pay for decent editors, formatters and cover art – and that’s before you’ve even started marketing. It’s a big risk because you’re laying out quite a sum of money with no idea of how long it will take to recoup, if ever. It’s an uphill struggle to find a readership, get reviewed and get your name out there. That said, it’s an awful lot of fun and those first few positive reviews, or bit of fan mail will make you happier than an eight year old on Christmas morning!

Any closing comments for your readers?

Thanks for taking a chance on a new author; I hope you enjoyed the books! Book three should be out later this year and I post snippets on my Facebook page. It’s always nice to hear from readers so feel free to stop by and say hello. If you haven’t read my books then I hope you’ll take a look, they are available in paperback and eBook and from all online stores.