Night of Knives is the first published novel by the Malazan co-creator Ian Esslemont. It’s 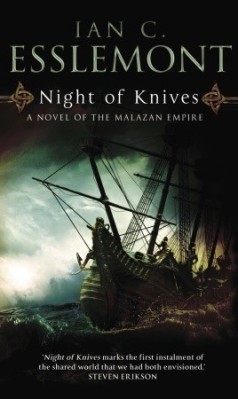 premise takes place before the prologue of Gardens of the Moon, the first instalment of Steven Erikson’s Malazan book of the Fallen. The premise of the novel is Laseen’s ascension to the Malazan throne through knife in the back maneuvering coinciding with a once in a generation Shadowmoon that causes hounds of shadow to roam Malaz City wreaking havoc on any caught out in the dark.

The main characters of this tale are Temper and Kiska. Temper is a military veteran and capable warrior and Kiska is a stereotypical teen hoping to make an impression on the Malazan soldiery within the city with the hopes of joining. They share POV time with one another and though they are not fleshed out with much authorial strength, they are still given enough background that I was able to care enough for them to continue turning pages.

This particular Malazan novel does not have the strength or complexity of Erikson’s Malazan book of the Fallen tales, yet it is still a valuable read to Malazan fans. As Laseen’s ascension is an important aspect of Erikson’s series it is a recommended read for any Malazan fan. I personally was able to look past some of the weak storytelling and flaws and found it to be a pretty enjoyable read. The key for any Malazan fan picking this one up is to separate Erikson from Esslemont in your mind and love the novel for what it is, the all important tale of Laseen taking over in an intense night of assassins and hounds of shadow.

The novel does have several intense and triumphant moments and I did enjoy it enough to finish it in only a few sittings. I do think Esslemont has a simpler style in the storytelling department and I am eager to see what some of the lengthier sequels to his work have in store. Although the writing pales in comparison to Erikson, the story was well thought out and certainly compliments what is already there with the Malazan Book of the Fallen.

Recommended specifically for Malazan fans or people interested in getting their feet wet in the Malazan universe without the commitment.

3 thoughts on “Night of Knives by Ian Esslemont”