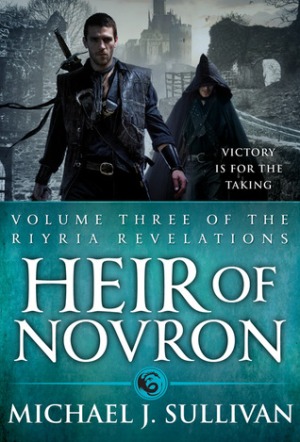 Not gonna lie, I had a lot of high expectations going into this one. The previous five novels in the Riyria series had forged a very special bond for me with these characters and I really needed their plot lines resolved in a justifiable way, a good amount of closure. I came away from the final book very pleased.

Percepliquis is much more intense than the previous books in the series because the stakes are much higher than ever before. With elves invading the empire, the empress trying to figure out whats been left to her, and the need for the heir to rise up and command victory the stakes lay on Hadrian, Royce and other heroes to delve into the ancient city of Percepliquis on a quest to save mankind.

The connections between books throughout the series have been strong. But in this last tale, it showed an even more impressive coordination with the previous novels as there were several mysterious and obvious connections I hadn’t realized were taking place that all came together in really interesting ways. I’ll reread the series not only because I thoroughly enjoyed it, but also to reread and understand all those little hints and connections I missed the first time around and was surprised by in the end. If you haven’t given Riyria a try I don’t know why you’re reading this. If you haven’t gotten around to that last book for some reason, it will be the book that left all others behind it and give you solid closure to a wonderful series with Hadrian and Royce.